There’s no hard and fast answer, except for “It depends.”

Oh, and by the way. I once unsubscribed without realizing it from a newsletter I really wanted to attend. The organization was using a service like Constant Contact, Emma, or Mail Chimp to send the newsletter. It was like pulling teeth to get back on the email list. Lesson: You don’t want to lose subscribers.

I was reminded again today about the reason we’ve been recommending that clients continue to ask for Windows 7 32 bit. We were helping a client install PFW for Windows 5.9 when we got a “Runtime error 449” (I think that was it). A Google of the error returned the information that 5.9 client was evidently not compatible with Win 7 x64.

Until all your software is up to date, and all your printers are new, we still recommend that you order 32 bit. Yep, it’ll be older, but it might just work with your software and printer drivers.

Companies that keep their software up to date seem more satisfied overall with their systems. I’m not sure why this is, but I know that it helps them avoid all kinds of issues. Older versions of software seem to cause more software compatibility problems these days than in the past.

Here’s the pattern I see:

Windows Vista was a major change in operating system for Microsoft and many Windows users. It was also a disaster from a PR standpoint. I never had many problems, but some people did. As a result, many skipped this version. Software publishers didn’t have the mass of customers moving to the new version, so many software bugs weren’t worked out.

Windows 2008 Server, Microsoft SQL Server 2008, and Windows 7 used many of the same technologies as Vista. The recession hit just as many of these products were coming out. Businesses (and users) have updated to these technologies as they had to. Many businesses are still updating from Windows XP to Windows 7.

The software products that didn’t get a full test under Vista (because relatively few businesses implemented it) are now getting tested under Windows 2008 Server and Windows 7.

Solution: Clients that keep ERP software (and other software, for that matter) up to date are generally more satisfied in the long run.

Let’s face it, the IT industry has enough things going on to frustrate people. Viruses, SPAM, popups, phishing, and cyber attacks, just to name a few. And that’s not even to mention the possibility that your personal information, or lewd pictures that your underage daughter sent her boyfriend (or that your son sent his girlfriend, for that matter) wind up on suggestive sites.

DGG will begin offering quick tips (30 minute webcasts) on Thursday afternoons. We’ll begin with casts covering the products Sage ERP ACCPAC, Intuit QuickBooks Enterprise Solution, and Microsoft Dynamics NAV. We’re looking at some other potential offerings. The Q1 2012 schedule is available now at http://www.dgginc.com/cms/webcasts.htm, and you can register at http://dgg.eventbrite.com. 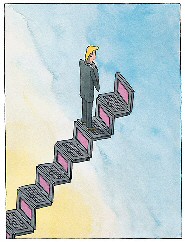 I really think that businesses have two basic ways of thinking about business software and technology. Either it is a glorified typewriter and bookkeeping system or it is a strategic asset that will help reach goals.

Most businesses say it is the latter (a stairway to their goals). Think with me for a minute about that, though. Some of the very same businesses that would agree with the idea that ERP and operational software is a strategic asset would also admit that their software is 10, 15, or perhaps 20 years old. Some companies we’ve worked with have software that still forms a critical core of their business processes that is older than this.

Twenty years ago, overnight delivery was in its infancy. The internet was not yet widely known. In fact, many small and mid-sized businesses still kept books manually.

A car that is 20 years old (say 1992 model) might or might not have air bags. Until 10 years ago, most low-end vehicles didn’t have airbags as a standard feature. Ten years ago, most cars sold did have airbags, but second-generation airbags (the kind that don’t break bones and cause internal injuries) weren’t mandated on cars until 1998.

It’s interesting that most businesses we work with that have old ERP, accounting, or operational software systems also want to revise their processes. They recognize that their business software is holding them back. Perhaps they’re worried about the Gladys Principle. Or maybe there is another reason.

So I ask you: Why do businesses do this to themselves? One reason is cost. Ok. I understand that. But as someone said about education, “If you think education costs a lot, you should try ignorance.”

Another reason is simpler than most businesses will admit: inertia — “A body in motion tends to stay in motion in a straight line until acted upon by an outside force.” Change is hard. Sorry. It is in our DNA.