Skylake is Intel’s name for their 6th generation of processors. Microsoft has announced that within 18 months, only Windows 10 will be supported on Skylake. In other words, they won’t continue to build the code necessary to run Windows 7 and 8 on the newest processors. Here are a couple of articles: from the Verge and from extremetech.com.

Does This Affect You?

So does this really affect you? Afterall, you just bought new computers a week ago. If you go to Dell’s site and navigate to pages where they’re selling new Dell PCs, you’ll see the following or something similar in the text description of the processor: “6th Generation Intel® Core™ i3 processor.” Now if you go to Google, you’ll find that “Skylake is the codename used by Intel for the 6th generation Core processor microarchitecture,” courtesy of Wikipedia. This means–simply put–that if you buy this (low-end) machine from Dell today, you’ll eventually have to upgrade to Windows 10. And when you upgrade to Windows 10, you’ll have to ask: “Is my software compatible?”

An Example: Is my ERP compatible?

Suppose you have an accounting and ERP system that’s 7 years old. Generally, by the time a product is 7 years old, the manufacturer (say Sage, Intuit or Microsoft) has “discontinued support.” This means–in a nutshell–that there will be no further upgrades or fixes to the software. In addition, it means that new updates to existing operating systems won’t be tested with the software; no new compatibility will be announced. So if Windows 10 came out after support stopped, it’s not that it won’t be compatible; you just won’t know (officially) whether it is compatible or not. 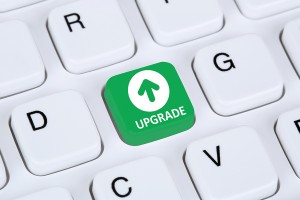 Enter Google and other consultants. So let’s suppose you Google a product that’s long out of support and add “Windows 10” to your search. You’ll likely find (as we do) that there are some consultant blogs out there (like this one) that claim, “we tried it and it worked!” Problem: where and how did they try it? If they tried it in-house, and not in production situations, I generally don’t trust it. I’ve seen a lot of software in 30 years that seemed to run on the new operating system. Later I found out that it didn’t work 100%; usually I found out before there was data corruption.

In the best of cases, if you’re running an unsupported program version on a new version of Windows, you’ll find yourself hearing, “I’m sorry, we don’t support that version any longer,” when you have a problem. You will never know whether the problem is the software, incompatibility, or something else.

In brief, our observation is that businesses that stay relatively current have fewer problems, are more satisfied with the product and are better able to compete. Businesses that don’t upgrade on a regular basis have increasingly more issues as the software gets older.

Bottom line: If you use a computer, you need to keep your software up to date!